What Types of Waterfalls Are There?
Waterfall Seasons - The Waterfall Guide

Here is an easy picture guide to define the many different types of waterfalls that exist in the world: fans, horsetails, tiered, segmented, plunging, punchbowls, blowholes, frozen, sub-terranean, blocks, chutes, slides, cascades and screes. Distinguishing between them can be difficult, because sometimes waterfalls include features of more than one type of waterfall. Here are some purer examples, compiled from my own experiences of visiting waterfalls.
Plunging (Curtain) Waterfall:
A plunging waterfall is a waterfall that loses contact with the rock over which it flows. These waterfalls are the classic image of a waterfall, with a free-flowing, near-vertical curtain of water, usually with a cavern behind the base of the falls. The cavern is created by turbulence under-cutting the rock face during high flows. An example is Serenity Falls in the Gold Coast hinterland of Queensland in Australia. 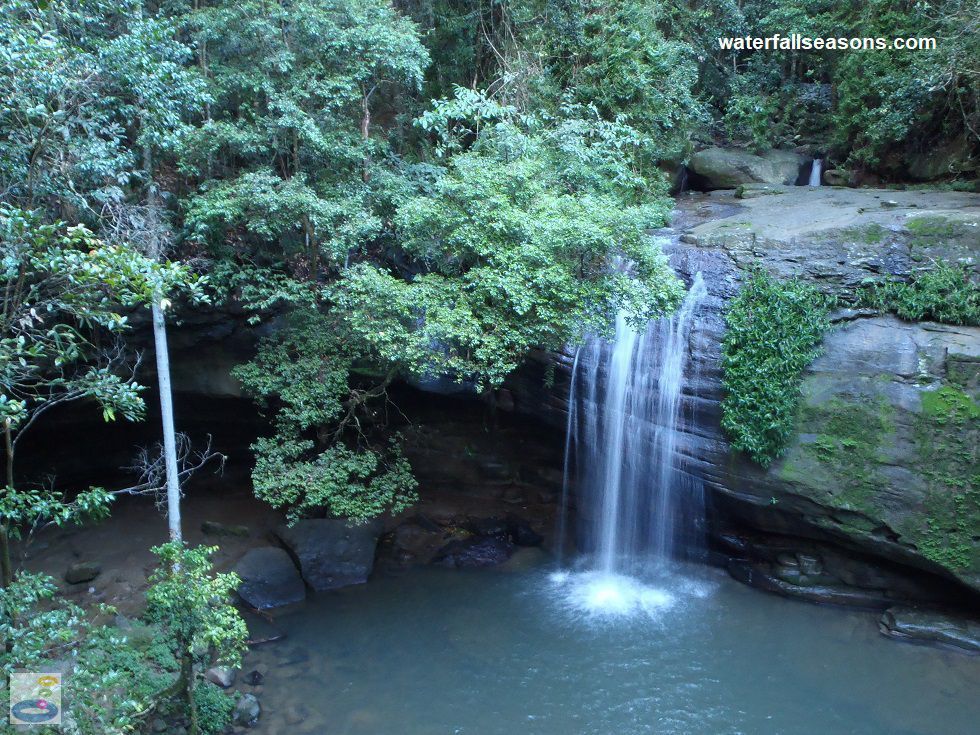 Above: The water at Serenity Falls detaches from the rock face to form a curtain of water known as a plunging waterfall (Order this image)
Horsetail Waterfall:
A horsetail waterfall is where the water remains in contact with the rock surface, and the shape of the waterfall is long and thin, similar to a horse's tail. A good example is Acland Falls in Peel Forest on the south island of New Zealand. In this example, the horse's body is elusively hidden by the thick forest. 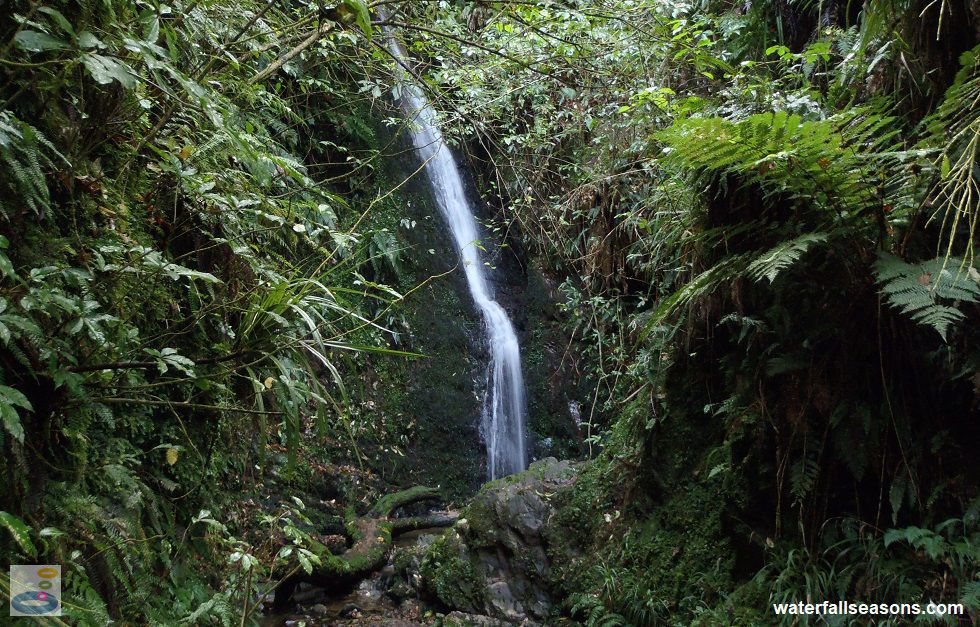 Above: The long, thin horestail waterfall at Acland Falls (Order this image)
Segmented Waterfall:
A segmented waterfall is where the flow of water splits into two or more parallel branches (or segments), usually separated by rock in between. A good example is Sailors Falls in Daylesford in Victoria, Australia. In this example, the waterfall splits into two (and possibly three) distinct streams before re-forming in the creek below. Often the secondary streams will only emerge during moderate to high flow conditions. 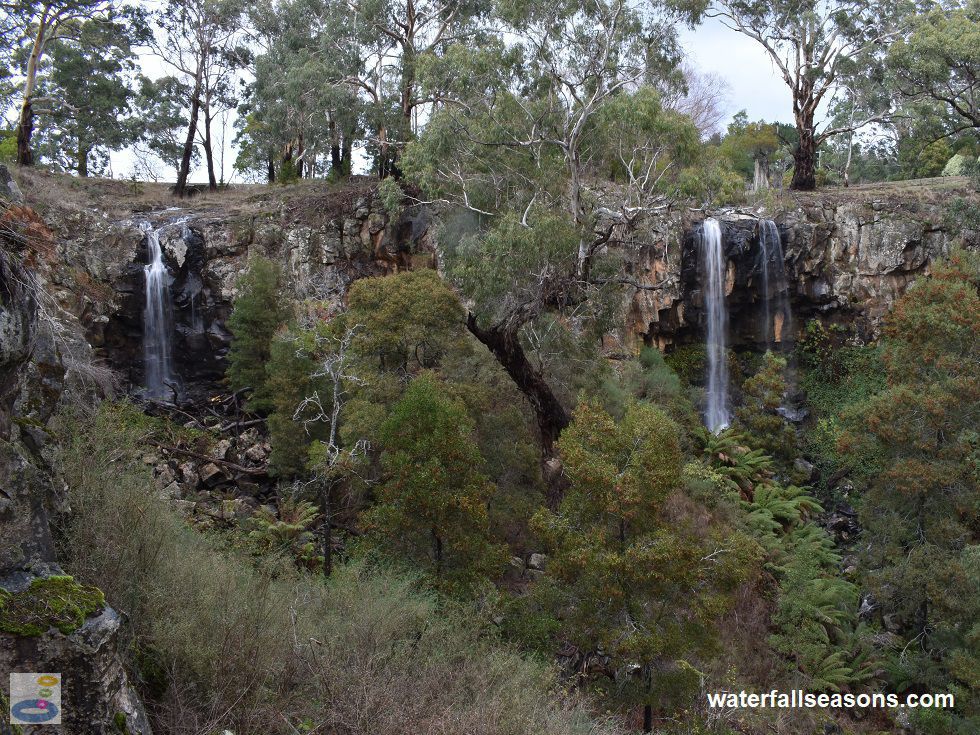 Above: Two distinct branches (or segments) at Sailors Falls (Order this image)
Share these waterfalls:
Tiered Waterfall:
A tiered waterfall flows over a series of two or more large steps, where the water does not remain in contact with the rock surface. It is similar to a plunging waterfall, but with several connected steps, rather than a single drop. An example of this type of waterfall is Orchid Falls on the main island of Fiji. In this example, there are several distinct steps (or tiers), with a flat platform of rock in between each step. 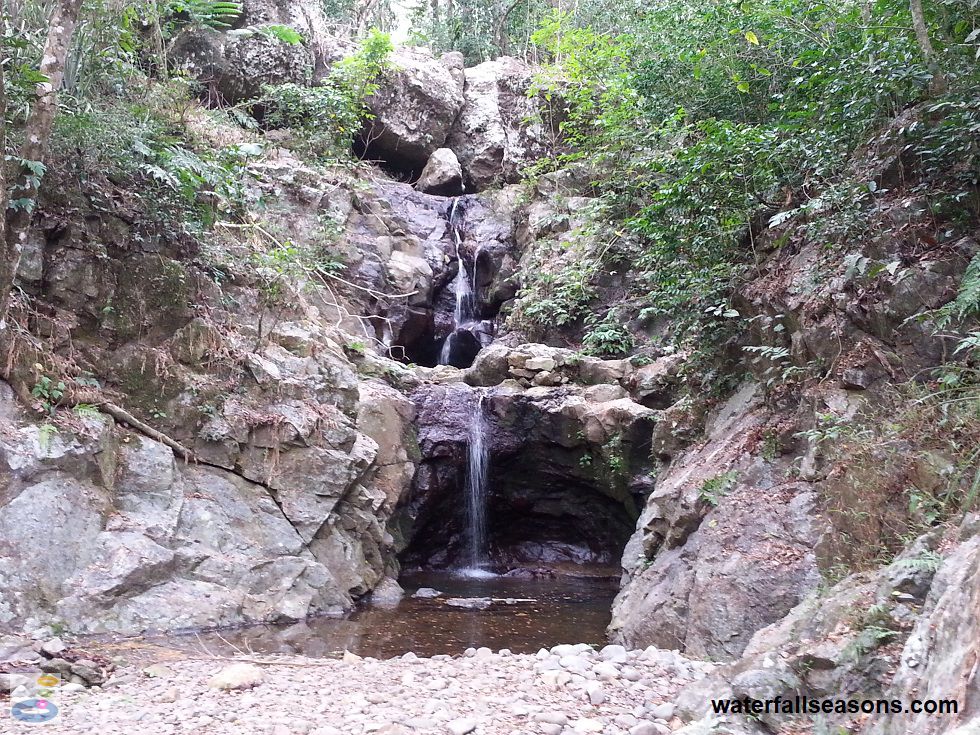 Above: The separated steps (or tiers) of Orchid Falls (Order this image)
Cascade:
A cascade involves a series of small steps over rocks, where the water remains in contact with the rock surface. The steps often do not span the whole width of the river. An example of this type of waterfall is Olinda Falls in the Dandenong Ranges of Melbourne. In this example, the water rolls and bounces over boulders down the side of a mountain, but always stays in contact with the ground surface. 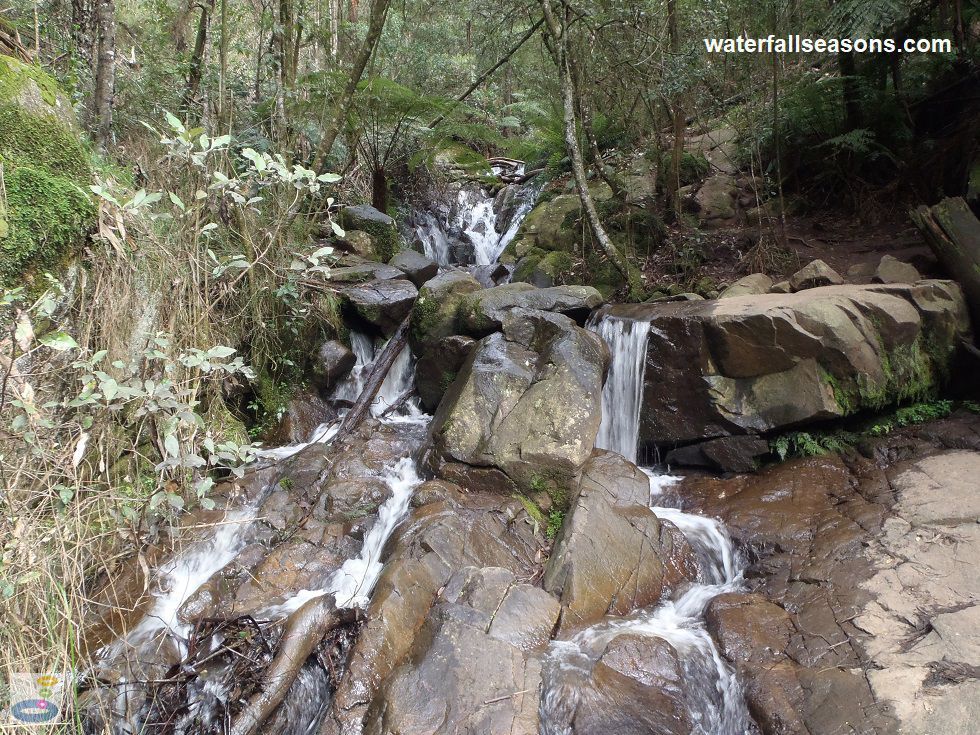 Above: Water rolling down the cascades of Olinda Falls (Order this image)
Blowhole:
A blowhole ejects water under pressure through a fully enclosed hole in the rock face. This type of waterfall is often the result of past mining activities, when tunnels are drilled through a rock face on the bend of a river to divert the flow of water. This allows the downstream bend in the river to be drained and dredged. An example of this type of waterfall is The Blowhole in Hepburn Springs in Victoria, Australia. This blowhole is at its most spectacular after heavy rainfall. 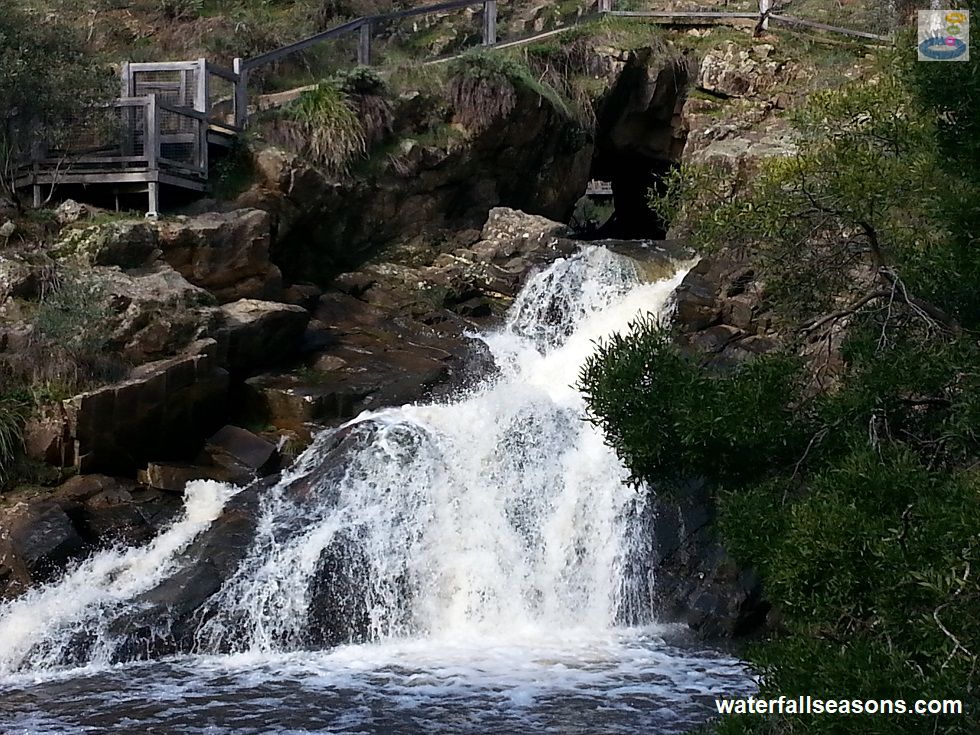 Above: Looking through the Blowhole (Order this image)
Punchbowl:
A punchbowl waterfall blows water out under pressure through a narrow channel in the rock face, into a circular pool below. Punchbowl falls resemble a round bowl of fruit punch being filled by a stream of liquid poured from above. As you would when pouring punch, the water going in a punchbowl waterfall is not supposed to touch the side of the bowl. Genuine punchbowl falls are relatively rare compared to other waterfall types. The only punchbowl waterfall that I have visited is Devil's Punchbowl in Arthur's Pass on the south island of New Zealand, but unfortunately the conditions were too icy to safely reach the bowl, and the flow of water was not quite strong enough to push out very far from the rock face. 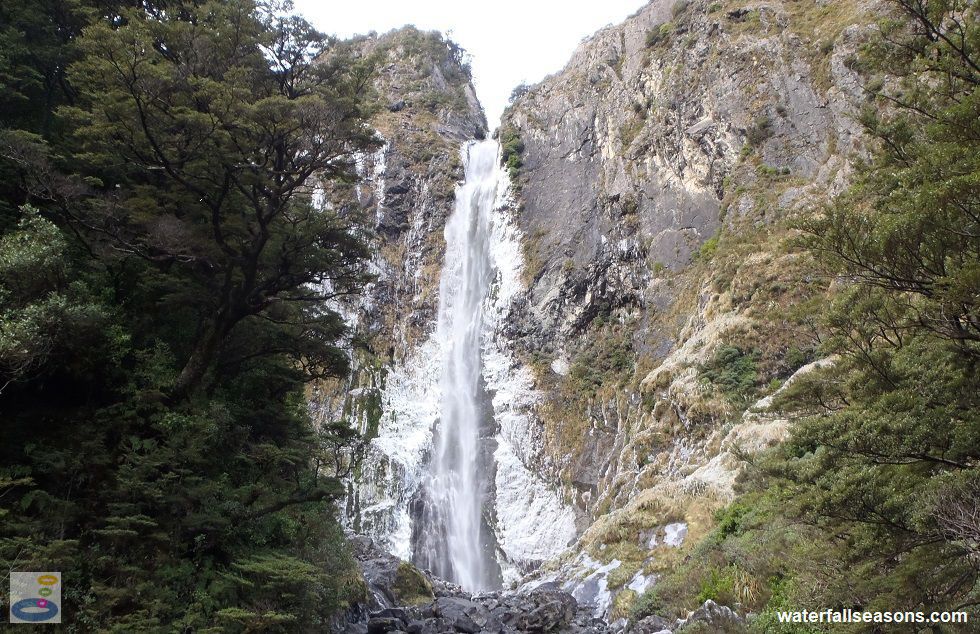 Above: Water squeezing through the narrow gorge into Devil's Punchbowl in New Zealand (Order this image)
Slide:
A slide waterfall involves water flowing over a rock face with a low angled slope that is much flatter than a typical waterfall. These are often formed by solidified lava flows, such as the Erskine River Rapids in Lorne along the Great Ocean Road in Victoria, Australia. As the name suggests, waterfall slides are like a giant slide. 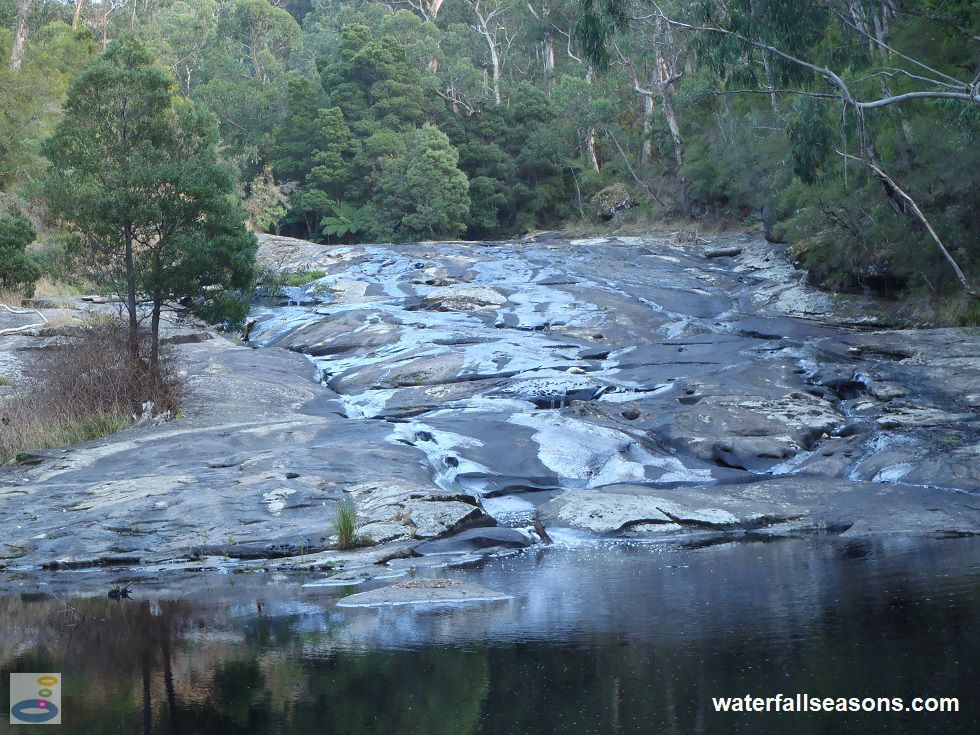 Above: The flattish slope of the Erskine River Rapids waterfall slide (Order this image)